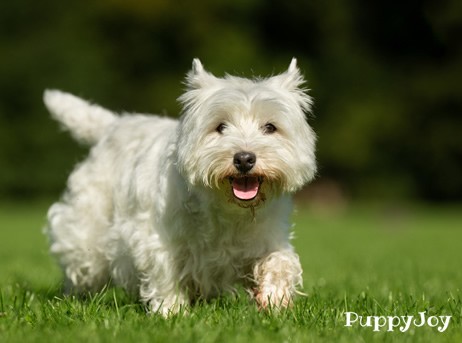 The West Highland Terrier, more commonly referred to as the Westie, is a small, lovable dog often found to have an energetic personality and a charming predilection for mischief. They are characterized by their small stature, blunt muzzle and raggedy coat. Despite their small and cute appearance, Westies can become snappy if they’re spoiled; so be sure to keep consistent and firm rules around the house or you’ll have a little terror on your hands. 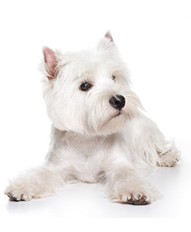 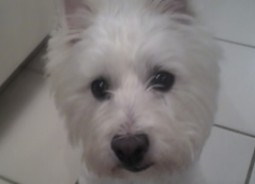 If you’re thinking about getting a dog and you want a little bundle of love and energy, you might want to consider getting a West Highland White Terrier. I have had two Westies, including my current Westie Violet, and I plan to keep giving a home to Westies for the rest of my life.

My Westies have been loving and loyal, and are absolutely adorable on top of everything else. They’re active and love to play, but not overly so to where you need to exercise them into exhaustion. They’re generally friendly, and my current Westie loves people and can’t get enough of new friends and acquaintances.

All in all, I can’t say enough about the breed. If small dogs are your thing, it’s hard to beat a Westie.

Temperament of a Westie

I have had two Westies, both female. I had Ivy for 14 years before she passed away. Three years later I got Violet, who is 9 now.

While you might think that two members of the same breed are going to act the same way, that couldn’t be further from the truth. My first Westie, Ivy, was as loyal a dog as you can imagine. She bonded with the whole family, but me in particular. I wouldn’t say she was standoffish toward other people she didn’t know, but she was only moderately friendly.

Violet, my current Westie, is another story! Bring a new person into the house and she can’t stop wagging her tail and coming over to be petted. And it’s the same way with dogs. Ivy was always kind of wary around other dogs, but Violet can’t wait to make friends.

Both Violet and Ivy were active and loved to run around in the yard. Ivy, though, was more athletic and sporty. She enjoyed trying to catch a small ball or toy in the air in her mouth. Poor Violet doesn’t seem to have very good vision when it comes to objects flying through the air.

Both dogs could be prone to barking at times, though not excessively so. Violet doesn’t like it when family members leave the house, and she’ll bark a little bit as we’re pulling out of the driveway. She quickly calms down, though.

For both Ivy and Violet, training them to do their business outside took maybe 3-4 weeks. I can’t quite remember with Ivy, but it was somewhere around that time frame. Violet certainly didn’t have too much trouble picking it up.

We never taught Ivy much in the way of tricks beyond simple stay, heel and come. It took maybe a couple months to get her the basics, and she was always obedient after that. With Violet, she had a little bit of a biting issue when she was a puppy. Not biting as a sign of aggression or to hurt, but exploring the world (including people) using her mouth. Her bites rarely hurt, but it’s a bad habit to have, so we had to train her out of that. It took her until she was maybe 8 or 9 months old to get out of the habit.

Violet is quite the trick performer now. She’s been taught to roll over, to high five, and to play dead when ‘shot’ (We point a finger and say ‘POW’). It took her a few months to pick those up, with a little bit of reinforcement with some treats.

Both Ivy and Violet ended up being pretty controllable in most situations, and would come when called and stay when told to. The exception to this is when animals like squirrels were in the yard – They go dashing off chasing them and there’s no stopping them!

Day to Day Life with a Westie

Going back to the differences between the dogs – Ivy was a great hunter. Westies were originally bred to catch vermin, and Ivy would have made her ancestors proud. Our back yard was far from the Great Outdoors, but we had a variety of squirrels, rabbits, mice and various other small creatures out there. Ivy could catch them all.

She caught mice every once in a while, and once I even saw her playing with it like a cat! She caught a squirrel once, as well as young rabbits every once in a blue moon. She even dug up a mole once. She was very much a born hunter.

Violet, on the other hand, didn’t get that hunter gene. She loves to chase squirrels, but she’s never come remotely close. In fact, she still doesn’t seem to understand that they’re safely on the high fence until she runs right up to the fence. She almost seems confused when she looks up and realizes that the squirrel is out of reach.

I’ll never forget the time Violet ‘caught’ a toad. She came running out of the grass with something in her mouth. She kind of set it down, and I realized it was a toad. Which proceeded to hop away! She hadn’t even bitten into it, she just picked it up out of curiosity.

Another funny difference between my Westies is their eating patterns. Ivy was a picky eater. She liked her dog food, and certain brands of treats, but that was it. As she got older, she became pickier. Toward the end of her life, she pretty much had a certain brand of treats she liked, and didn’t want to eat even other dog treats.

Violet is the opposite. She’ll eat anything. In fact, I’ve never seen a dog who loves vegetables as much as Violet does. The first sign she was going to be a major veggie hound was when I planted a cauliflower plant in my garden when she was young. When it had grown to a decent size, Violet ate all the leaves! She loves lettuce in particular, but she’ll eat carrots, green peppers, tomatoes and pretty much any veggies you can imagine.

For all their differences, there are a lot of similarities between the two as well. One thing that must be a trait of the Westie breed is loving high ground. I guess ‘Highland’ is in their name, after all! Both Ivy and Violet love to be on elevated terrain. Both of them had their preferred sleeping spot and perch, which was on the top of the couch back. They absolutely love being able to survey the scene from elevation.

I can remember one year when we had a heavy snowfall early in the year, and I was digging a path out for Ivy in the back yard so she could have a place to do her business. On a whim, I shoveled snow from all around the yard to make a giant snow mound, probably close to five feet high. Ivy loved it. For the whole winter, until the snow melted, the first thing she’d do when let outside during the day was run up the path onto her ‘mountain’ to look over the yard.

At the time, we thought maybe Ivy was just like that in terms of liking high places, but then Violet was the same way. I guess it’s just something about Westies.

Another thing they both shared is a love for playing with their toys, and their preferred method of play is very similar. They have that Westie vermin chaser instinct where they love to play tug of war and shake the toy back and forth. So you’ll throw the toy, then chase them down and ‘fight’ them for it, eventually get the toy and toss it again.

Both had serious appetites for play, and also enjoy running around the yard. I never had any problems with signs of a dog being under-exercised like them tearing up furniture or carpet or anything like that. So I don’t think the breed has an issue with a moderately active lifestyle.

On thing both enjoy greatly is snuggling with their family. Whether lying on a friendly lap or cozying up at the foot of the bed, both Ivy and Violet love the heck out of their family, and I suspect all Westies do.

A nice thing about Westies is that they don’t shed much, if at all. They need regular haircuts or they get shaggy, but the house isn’t visibly filled with dog hair, which is definitely appreciated. They both ate two times a day, morning and evening. Violet is prone to occasional urinary tract infections, but aside from that I haven’t experienced any health problems with either of them.

From a standpoint of activity patterns, both Ivy and Violet tend to like to sleep during the mid morning to early afternoon after breakfast. They’d then tend to become more active in late afternoon into the night, and go to bed around when we do. That’s not to say they couldn’t be active in the morning and early afternoon, but if left to their own devices they like to nap around that time.

One goofy little quirk Ivy had: She couldn’t stand the sound of a car horn on TV or real life. The sound of a horn beeping would set her off barking like mad for 30 seconds to an hour. The real life car horns aren’t such a big deal, since it’s pretty rare to hear cars beeping in our neighborhood. But sometimes the TV car horns could be an issue. All it would take would be a movie or TV show set in New York City, and the horns non-stop would drive her nuts. We have no idea why she was like that with the horns – it was just a little mannerism of hers. Violet isn’t like that at all. She perks up a little bit if a dog barks on TV, but that’s about it.

Is a West Highland White Terrier Right for You

The Westie lover in me wants to say ‘Of Course!’ And I do think Westies are a fantastic breed of dog. That being said, I’m sure there are some people who would be better suited to another breed.

Like I mentioned, Ivy and Violet were so different in some ways that I almost hate to generalize about the breed, but here are some things I think are true:

Westies need some activity to be happy. They don’t need to be running around all day long, but they definitely want some good exercise. If you don’t have a situation where you can let them run around a bit, they might not be the best breed for you.

Westies love people, especially their family, and don’t necessarily like to be home alone all the time. This is especially true for Violet. If you’re going to be getting a dog but have to leave it home alone during the entire work day with no company, another breed might be the way to go.

Those are about the only two things I could think of that would be a negative about Westies from certain peoples’ perspectives. Unless, of course, you want a big dog for security or some other reason. Little Violet doesn’t weight more than about 14 pounds, so she’s not likely to scare many bad guys away!

But if you’re looking for a loveable, energetic and adorable dog, a West Highland White Terrier is a great choice.

Tell Us About Your West Highland White Terrier (Westie)