Find Rottweiler Puppies For Sale Near You 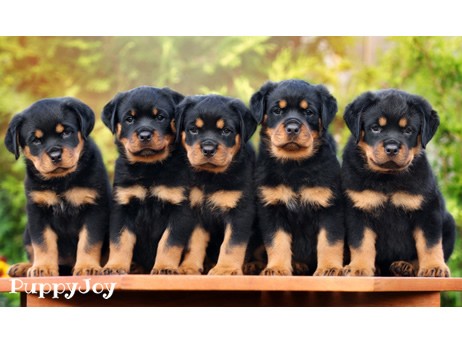 The Rottweiler is the ideal guard dog. With a broad, deep chest and a muscular, powerful body it is indeed an impressive animal to behold. Don’t let appearances deceive you however, contrary to popular belief, the Rottweiler has an extremely calm and even temperament, provided it is trained correctly from a young age. The Rottweiler is a very social dog and is suitable for a household with children, other dogs and quite surprisingly, even cohabits well with cats. 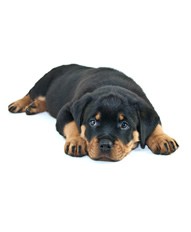 Bella & Why I Recommend Rottweilers - Even to Families

I was the spoiled only kid growing up. The favorite grandkid on one side, the only on the other. If I said I wanted something, I usually got it. I had mentioned to my grandmother once that I really wanted a puppy. We moved around a lot and I hardly ever saw her.

One year she knew we'd be in town for Christmas. She saved up and bought me the most beautiful Rottweiler puppy. At the time, my dad had an Australian sheepdog we called Blue. When I got that sweet little puppy I knew her name right away - Bell. Yes. She was named to fit my dad's dog after an ice cream company!

But it suited her. She was just the sweetest puppy. She was also super smart. Debatably the smartest I've ever had. Training her was so simple. She was already housebroken when I got her, but she was only about 3 months old at that time. Teaching her basic commands (sit, stay, speak, roll over) only took about a week.

My parents were worried because the breed gets a bad name. But the truth is that they had nothing to worry about. Bell (who I often called Bella and Belly Girl lol), was incredibly affectionate and respectful. When we had company over, she was nothing but sweet and friendly and playful. But there were sometimes her guard dog nature came out. And it wasn't the nightmare situation that you might be thinking.

One weekend my parents invited my uncle, his wife, and my cousins to come over. They lived far away and arrived sooner than we expected. We were at the store buying groceries for their stay. Rather than have them wait outside, we told them where our spare key was and told them to let themselves in. About an hour later, we came home only to find everyone waiting outside. We laughed and asked them why they were outside. My uncle said that when he tried to open the door, Bell was sitting there. He said she never made a move to bite or attack him, but that she did sit there and growl enough to make him not want to come in. We were SHOCKED to hear this. When we opened the door, Bella jumped at them - licking at them and trying to get them to play.

I was... less than an ideal kid lol. I was a chronic rule breaker and my parents worked very long hours. This left me with plenty of time to get up to all sorts of trouble. One day I had the brilliant idea that I was going to invite my boyfriend over while my parents weren't home. We were only 13 at the time, and it was relatively harmlessly intended. I told Bella that I was going to have a friend over and her attitude immediately changed. She started pacing near the door and giving me "that look". I swear she understood not just what I said - but that this was highly against the rules. It was confirmed when my boyfriend arrived.

When I invited him in, Bella wasn't going to have any of it. She got between me and the door, sat down, and growled (lowly) at my boyfriend. Did I mention that he was already afraid of dogs? Ha! He refused to come inside and ended up leaving after only a few minutes of talking outside. When I came back in, Bella was her happy, care-free self.

But Bell was more than just a good guard dog with an uncanny sense of when I was breaking the rules. She was a shoulder for me to cry on. When the same boyfriend eventually broke up with me, I was crushed. He was my first very serious boyfriend and it was just the worst feeling in the world. I was lying in bed, crying my heart out when Bella nosed the door open. I asked her if she needed to go out. She just came straight to the bed, nuzzled up to me as close as she could, and went to sleep.

She was one of the most playful breeds I've ever had the honor of spending time with. She was always up to play - but never destructive. As a puppy, of course, she chewed up a shoe or two, but nothing that a little discipline didn't fix. We bought her plenty of toys and gave her lots of walks and time outside. She was always down to snuggle, cuddle, play, and walk.

I did notice that she didn't listen to my parents as well as she did to me. She very much was loyal to the family, but she tended to favor the authority figure. I've known other Rottweiler owners who said their dogs were unruly. I never experienced this, but I also tend to raise my dogs with a firm but loving hand. And to be honest, once she was trained, I rarely had to get on to her. She was, as I've said already, a very respectful girl.

I don't have many pictures left of my Belly Girl - she never really would sit still for them! She got really sick after she had her first litter and sadly passed away. It's been over 17 years since I had that girl. I think about her often, and she's become my standard for what a good dog is. Right now I have a fat old Labrador. I got him just a couple of years after Bell passed away. He's just past 15 years old now. He's a good boy, and I love him dearly. But he's not my Bella.

I highly recommend Rotties to anyone. They are loyal, smart, beautiful, kind creatures. They don't take a lot of time to train, they're smart as a whip, they're big but kind. They do take strict training and discipline, so they may not do well with you if you aren't willing to work with them. But if you earn their respect, you will have a fantastic dog for the rest of their years. They make great babysitters, great friends, and amazing guardians.

Tell Us About Your Rottweiler