Find English Mastiff Puppies For Sale Near You 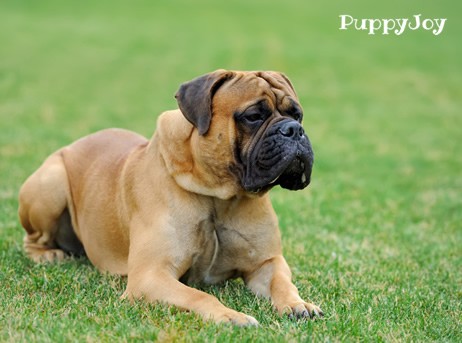 Old English Mastiffs are large dogs that most certainly fall into the category of the ‘gentle giant’. This massive breed is a guard dog by nature, they won’t bark at threats and very rarely attack however they have been known to lay on top of anyone they deem to be a threat to their family. The Mastiff is undeniably a great pet however, its size means it can consume on average 30 to 40 cups of food a day, think of the grocery bills! 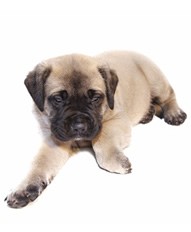 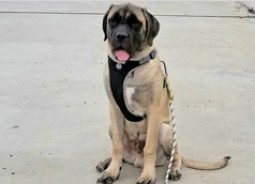 My English Mastiff is more than just a dog - he's my very best friend and my oldest child. Bruno came to me about four years ago completely by accident. I was 22 years old and fresh out of college when my mom and dad bought an English Mastiff puppy. Even at two and three months old, we could tell that this guy was going to be a giant. I remember sitting on the floor in their living room with this fluffy little puppy and laughing because even as a baby, he made their miniature dachshund look like an afternoon snack. My parents kept Bruno for the first couple of weeks, and then they went on a twelve day cruise. They left Bruno with me and they never got him back.

I lived in an apartment when I first got Bruno and I honestly expected that to be a huge problem. He was a big dog from the beginning and by the time he was a year old he weighed nearly one hundred pounds! However, it never really became an issue as long as I took the time to walk him at least twice a day. Usually, we would get up before dawn and walk the quarter mile down the street to the local coffee shop. The first few times we tried this, everyone we passed would steer clear of us because Bruno was so big and looked so intimidating. I won't lie, I loved that I had a dog who was big enough and scary enough to keep random strangers far away. Alas, that was short-lived. Bruno is a very friendly dog, so a couple of weeks into our morning strolls he had already made friends with all the regulars at the coffee shop and every early morning jogger that we passed on a regular basis. It's actually Bruno's fault that I met my now-fiance. See, he was one of those coffee shop regulars and one morning Bruno stuck his nose right into Joshua's lap. Joshua fed him a tiny piece of cinnamon roll, and they became best buds. Over time, Joshua decided that I was okay too and now we're getting ready for a wedding.

Even though Bruno generally loves people, he isn't always friendly. If we are sitting at home and we have an unexpected visitor, Bruno can get upset. Usually, he'll bark one time when someone pulls into our driveway. Then, he runs to our front window and shoves his head under the curtain to look outside. If we know who's walking up, his little tail will start wagging and he'll stand by the door just wiggling and wagging. If we don't know the visitor, he's much more reserved. He will sit right next to the door, just watching the person walk up through the floor-length window. He doesn't really bark any more unless he feels like something is really wrong. Once, we had someone come up and start jiggling our doorknob. We still don't know what they came to our house for, but Bruno barked and growled until they walked back down the street and out of sight. I like to think of Bruno as my salesman deterrent.

Bruno is also great with other animals. He grew up with my cat, Ralphie, and now he lives with two cats and an English Bulldog. He's also great with kids. When we brought my son home from the hospital, I was incredibly nervous because I didn't know how my giant of a dog would react to the squirming, screaming little human that I had made. As it turns out, he loves babies and will sit next to my son's crib all day. Even though he's been great in every situation so far, we are very careful not to leave him alone with the baby and we try to separate our animals when we're going to be gone. He's an awesome dog, but there is always a chance that he could do some serious damage - even if it was just an accident!

I knew Bruno was going to be big, and I figured that waiting would mean that I had a giant, rambunctious, untrained dog the size of a small horse to contend with later on. I valued my belongings and my sanity, so we started training as soon as he moved in with me. I mostly relied on YouTube and online articles when I started training my boy because I had no idea what I was doing. All in all, it worked out pretty well and it didn't even take too much time!

We trained a couple of times a day for about ten minutes each time. I noticed that if I went over that time limit, Bruno would get bored and wander off to find a chew toy or a tennis ball. I started by teaching him his name, and then I taught him how to sit and walk on a leash. I wasn't really planning to have a prim, proper, perfectly trained dog, so this is all I taught him during his first year or so. Over time, I've added in a few tricks and a couple more obedience commands like "drop it" and "leave it". If you plan on training your dog at all, I would definitely teach those commands early on. It will save you many chewed up shoes.

Potty training Bruno was a breeze. After about a week, he never had another accident. The key to training him quickly was putting him on a schedule. Every morning, we would wake up, he would go potty, and then he would have his breakfast while I got dressed. Then, we went on our morning walk and he would be put in his crate while I went to work. I was lucky enough to be able to come home and take him out again on my lunch break, so he didn't have to sit in a crate for a full eight hours at a time. We would go out again when I got home, after dinner, and right before bed. He didn't always have to go every time we walked outside, but I wanted him to have plenty of opportunities. Over time, we've kind of gotten off of this schedule and now he just sits by the back door and looks at me if he has to go. We also have a yard now, so bathroom breaks are much easier.

I used copious amounts of treats to train my boy. He got treats for going to the potty outside, treats for responding to his name, treats for sitting. He got treats so much that I started making them by hand to cut down on cost and keep him from getting too fat. Peanut butter cookies made with dog-safe ingredients were (and still are) his very favorite! Another thing that worked was praise. I was constantly praising Bruno when we were in the training phase. I didn't want him to be afraid of me, so I never yelled or spanked him. For Bruno, praise and treats did the job.

Is An English Mastiff Right For Me?

Bruno is the best dog I've ever owned. He's a gentle giant and a very sweet boy. I can't tell you how many nights he's laid next to me while I buried my face in his fur and cried. He just lets it happen and licks my face when I finally sit up. He enjoys being used as a pillow and he'll wiggle his way under my arms while I lay in bed at night. Most days, I wake up laying on a very warm mass fur - even when I fell asleep on a satin pillowcase. Even at four years old and 175 pounds, Bruno loves to play. He'll fetch all day. Once, he lost his tennis ball while we were at the dog park and came trotting up to me with a pinecone instead. He was pretty disappointed when I could only throw it a few feet, but he dutifully brought it back every time I threw it for him.

Bruno is also a counter-surfer. Once, I bought a birthday cake for my best friend's surprise party and left it sitting on the bar in our kitchen. I walked in to my huge dog laying across the kitchen counter with his entire face in the cake. I was a little bit upset, but he was so cute that I had to laugh. We put up baby gates the next day and even though he could definitely push the gate right over if he wanted to, he always just sits on the other side and looks at me with big puppy dog eyes until I move the gate and let him in with me.

In my experience, English Mastiffs are generally kind, dignified animals with a playful streak. They're smart, goofy, and very capable. They like to play, explore, and comfort. They get very attached to their people and once they love you, they'll protect you from the world if they can. They really are one of the best breeds that I've ever encountered and I can't imagine a better combination of characteristics. I highly suggest that anyone who's on the fence about this breed spends some time with one. I promise that you'll fall in love.

Tell Us About Your English Mastiff