Find Doberman Pinscher Puppies For Sale Near You 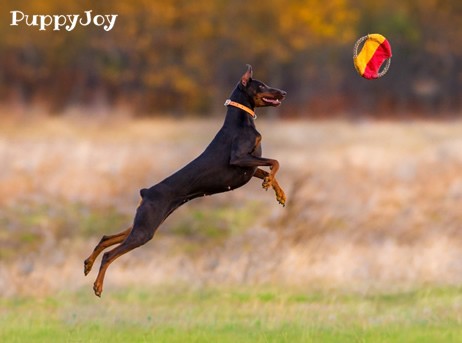 A medium sized dog with a boxy muscular body, the Doberman’s raw power and high energy make it an ideal guard dog. This breed may not be for everyone, however, and they are certainly not appropriate for first time dog owners. Due to their bold and assertive personalities they require an owner with experience who can develop a natural authority over pets. Once trained, Dobermans make fantastic companions; you won’t find a more loyal breed. 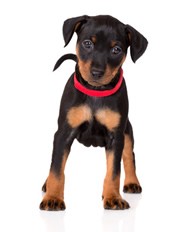 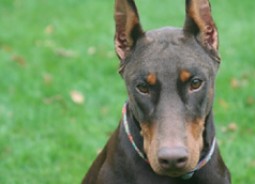 My Experience with Doberman Pinscher Dogs

I raised my 5-year-old Doberman, Mila, from a small puppy. She is a chocolate Doberman and has her ears cropped. She also has a docked tail. This is the first Doberman Pinscher I have had the pleading of owning, however I do not think that it will be my last. I have come to love and respect the breed, as a whole, and would eventually like to breed them.

There are so many good qualities in this breed to love that it is hard to highlight just a few. I think it depends a lot on the person and their tastes, as well as what they desire out of a companion. For me, personally, intelligence is one of the most important traits I look for in a dog. Doberman Pinschers definitely fall into that category. I also want a dog that has a specific role to play, other than sitting in my lap and being carried around. A toy breed would not fulfill that need, for me. Mila has the role of protector and guardian in my home, which is something I specifically wanted in a dog.

A Doberman isn't the right dog for everyone. Owning one is a huge responsibility because of their temperament. Someone who has a heavy hand and aggressive attitude can cause irreversible behavior problems and aggression in this type of dog. They make wonderful pets for those who put in the time and effort required.

Temperament of a Doberman Pinscher

Like any other Doberman Pinscher, Mila is very protective of everyone in the household and guards the yard against any "would be" inttruders. She is rather territorial and will not allow anyone to enter the yard without confrontation. I don't know if she is all bark and no bite because she usually scares people off before they enter our yard.

Because of her temperament, I knew it was imperative that I begin socialization with my Doberman as early as possible. VMila was socialized as a young pup to a variety of other people and dogs of all sizes. I didn't just wait around to expose her to things naturally, I set up situations to expose her to as many different things as possible. For example, I found elderly people, children, people of different races and genders for her to meet. I would take her with me to visit my grandma and practice not jumping on people while we were there. I took her with me on errands and when visiting friends with kids and babies. I introduced her to men and women of different ethnicities around the apartment complex. I let as many people as I could touch her and handle her.

I also introduced her to all different types of animals. She met both big and small breeds of dogs. I made sure to introduce her to a toy breed while she, herself, was small enough not to hurt them. I thought that she would get used to being gentle with smaller dogs and wouldn't hurt them when she was three times their size. It seemed to work great this way.

While Mila gets along with other dogs just fine, she is very dominant and will promptly put other dogs in their place beneath her. She's not aggressive about it, just authoritative. You can definitely tell who is the alpha when Mila interacts with other dogs.

The only complaint, or slight annoyance, I have with her temperament is that she tends to bark excessively when alerting me. While I am thankful that she is protective, and I understand she is only doing her job, she takes her role as guard dog a little too seriously sometimes. It seems like she works herself up and goes hypervigilent about alerting me to danger. For example, a plastic bag startles her and she barks like a robbery is about to take place. Even after she realizes it is a plastic sack, she still tries to alert me that it's there. I am now working on getting her to settle down on command so she doesn't continue to alert me needlessly.

My Doberman Pinscher is extremely intelligent and was easily trained in obedience. She is well-mannered around humans and friendly with children. She is easily bored and likes to be mentally engaged in some kind of activity. We constantly give her obedience commands and reward her for performing them. She liked to make her human family members happy. Mila isn't very cuddly, and would rather lay nearby to protect us. She is fiercely loyal.

For obedience training, I used a clicker and reward system to teach Mila how to behave appropriately and learn basic commands. Mila is very motivated by food so positive reinforcement worked like a charm. I started training basic commands, like sit, as soon as I brought her home at 8 weeks old. By learning how to sit at such a young age, it was easy to establish myself as her superior using the NILF (Nothing in life is free) mentality. Basically, what I did was make her sit down before I gave her anything she wanted. If she wanted to play, I would make her sit first. I made her sit before I gave her dinner or a toy. Basically, she had to work for anything she wanted, which put me in charge. It set up a foundation of respect and really helped with the rest of obedience training.

The very next command we worked on was coming when called. I wanted to make sure she had a solid recall and would come back to me incase she ever got out of the yard or house. The last thing I wanted was to be chasing my dog all over the neighborhood trying to catch her. We worked on the "Come" command relentlessly, and still practice it often. I will randomly recall her, and when she comes, she gets a treat. Now that she is older and knows what is expected of her, I have phased out food rewards and replaced them with verbal praise.

Mila mastered almost all the basic obedience commands with ease and performs them almost 100% of the time. She never had to go to a puppy obedience school because I took on the responsibility of training her myself, along with socializing her. It definitely helped to establish trust and respect with her from the very beginning.

Potty training was a breeze with Mila. She was completely trained in a week. I used a small crate and stuck to a strict schedule with her during this time. I fed her at the same times each day, which made it easy for me to anticipate when she would need to eliminate and supervised her every move. When she would stop playing, eat, wake, and drink, I would scoop her up and take her to the door, ring a bell tied to the doorknob and say, "Go potty", every single time I took her out. She caught on and started whining or ringing the bell to go outside on her own within a week. She would occasionally have a urine accident if I couldn't get to the door in time, but this rarely happened.

When I left the house for a few hours, I put Mila in her crate. I petitioned it off when she was a puppy so that she only had enough room to stand and turn around, and therefore had no room to eliminate in the crate. Upon returning home, I immediately got her out of the crate and took her to the yard to potty. I carried her so that she didn't have a chance to potty on the way outside. During her potty training period, I made sure I never allowed her the opportunity to potty in the house. By doing this I made it clear that her designated area to relieve herself was only outdoors. This system seemed to work very effectively for both of us.

Tell Us About Your Doberman Pinscher