Find Beagle Puppies For Sale Near You 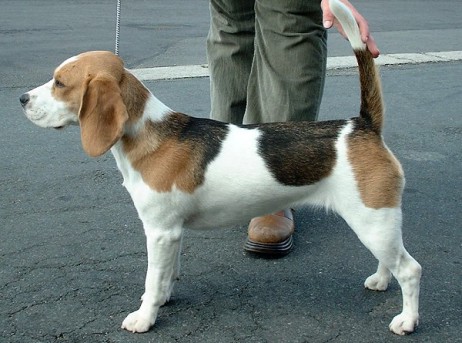 The Beagle is a hardy and robust hound dog, very similar in appearance to the Foxhound. Unlike the foxhound, however, they are wonderfully well suited to domestic life. They have loving and affectionate dispositions, they are great with children and they live alongside other canine pets well. Beagle’s also respond well to an extensive and varied exercise regime and also require sufficient mental stimulation to keep them happy. 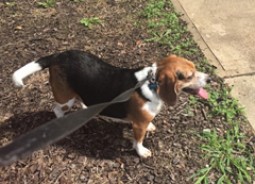 Let me tell you about my best friend, Bailey. Also known as Bailey Boo or beagle Bailey.

He's a tricolor beagle – meaning that he's black, brown and white – who adopted me two years ago after my beloved Casey, a 17 year old Chow Mix, crossed the Rainbow Bridge.

The first time I saw Bailey, he was huddled in the back of a kennel at an adopt-a-thon I attended two weeks after Casey died. the other dogs were busy barking and enjoying the attention that was being showered on them by their soon-to-be families, but poor Bailey was scared to death, trembling and had his back turned resolutely on the crowd. Of course, that drew me to him like a moth to a flame.

Attracting the attention of one of the rescue people, I asked about Bailey.

"Oh, that's Charlie," he began. "He's a Beagle. Don't know much about him. He was picked up in the woods and sent to a high-kill shelter. One of our volunteers saw him there. He was acting just like he is now. Scared. We knew he wouldn't survive the shelter, so we took him out to give him a chance."

I gently went up to the cage and let Charlie (he didn't keep that name long) sniff my fingers. Beagles are very scent oriented and he took a good whiff and looked up at me with his big, brown eyes.

I was in love.

Quickly finalizing the adoption, I took Bailey home within the hour.

Those first few days, Bailey slept. A lot. I think his little body (he's standard Beagle size, about 13 inches tall and 35 pounds) was so worn out by his ordeal that he needed to physically recover before his personality could shine through.

But when it shone through, boy did it shine through.

A trip to the vet found that he was somewhere between 2 and 5 years old, a pure bred Beagle and in great health. That made me happy. beagles have a lifespan of roughly 13 to 16 years, so the little stinker will be a part of my life for a long, long time!

One of the first discoveries I made about Bailey was that he had not really been house trained. I live in an apartment, so getting that taken care of was the first order of business. As was teaching him how to walk on a leash.

The first time I leashed him up, he just sat his butt down in the living room and refused to move. (News flash for all you potential Beagle owners out there: They are stubborn. If they don't want to do something, they will flat out refuse to do it, so patience and training is the key).

I simply made him stand up by lifting him up and walked a step. He looked at me as if to say, okay, I can do that. After a couple more steps, we went outside for our first walk and we were ready to start house training.

Being an adult male dog, he had no trouble with the concept of going to the bathroom outside. It was the concept of waiting to go that we had to work on. Here's what we did. First thing in the morning, it was leash on, out the door for a walk. Lots of praise when he went to the bathroom with a treat when we got back inside. During the day, I went from taking walks every two hours to four to six. Like all Beagles, Bailey is very quick to catch on and he was soon fully house trained.

Teaching him to sit, stay and come also just took some time and patience. To teach him to sit, I gently lowered his rear to the floor and said sit. I did this for about 10 minutes a time over the course of a couple of days and he had that down. The stay command was a little harder, because where you are is where Bailey wants to be. Here's what I did. I got him to sit and I took a few backwards steps from him, keeping my hand up in the stop position. I then said stay as I continued to move backwards. I rewarded Bailey with a treat for every time he did not move and in about a week he was good to go with that command. The come command was the easiest thing to teach Bailey and took literally less than five minutes. I simply said "Bailey, come," and wiggled my hand. He responded with a look that said "no problem" and immediately walked over.

Because he is scent oriented, walks with Bailey are always a fun adventure. If you have a Beagle, you can never go directly from point A to point B. Once Bailey catches the scent of something that interests him, he'll follow it until he can't follow it any more. And rabbits! Beagles are also hunting dogs and the first time I heard Bailey's Beagle bay was when he spotted a rabbit. Beagles are also pretty athletic and Bailey took off after that rabbit. How a 35 pound dog can drag an adult woman (sorry, not mentioning my weight) behind him, I will never know.

Unlike most Beagles, Bailey is not really a bayer. He will definitely let lose if he sees a rabbit, and sometimes when I leave him to go to work he'll bay as well. Don’t let that discourage you from adopting a Beagle, though. Just like when a dog barks for no reason at all, you can train a Beagle when its time to bay and when its time to be quiet.

Here's another thing about Beagles. They may be compact, but they are solidly built. when Bailey steps on your toes or decides he's going to lay down on top of you, there is no doubt that he's there.

Now, let's talk a bit about Bailey's temperament. I've already mentioned that he can be stubborn. But he's also the sweetest, gentlest fur baby I've ever owned. He wants nothing more than to be near a human, petted, stroked and loved on. He absolutely loves people as well. When we're out walking, he has no trouble at all going up to everyone he sees and "asking" to be petted.

He's great with other dogs and cats (but can get a bit jealous if he thinks I'm giving too much attention to one of his four-legged friends).

Hopefully, you can see why I love Bailey. He's smart, loyal and intelligent. He keeps me laughing with his antics and provides me with the unconditional love that only a dog can. I just pray he knows how much he is loved in return.

Tell Us About Your Beagle